Yesterday was the 6th and final day of my fast, and the day i broke it. i felt pretty even-keel that day, but i was excited to eat again. at around 4 pm i cooked some vegetable soup. i used fresh parsley and kale that had overwintered in our garden. 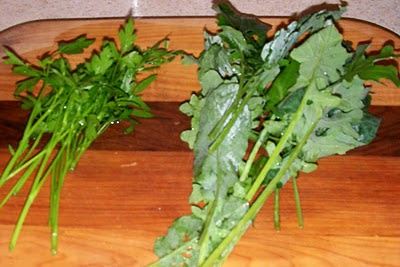 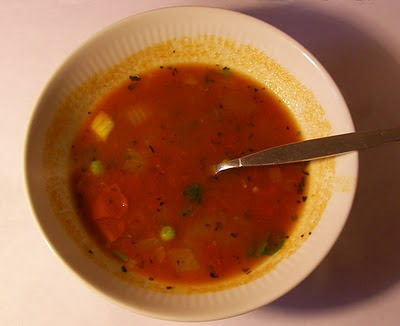 Strangely, eating after 5 days wasn't quite as triumphant-feeling as i thought it would be. it just felt normal. though i was only supposed to eat the soup that day, my tummy kept wanting more. it was hard to know when i was really full. i knew i shouldn't overstuff myself, but i ate some roasted seaweed, many handfuls of raw pecans, and half an apple. my tummy was grumbling like crazy the whole night, trying to process so much.

This morning i only craved another glass of lemonade. i think i ate a bit too much last night. i feel fine, but not bursting with energy the way that some fasters seem to feel.

Early this morning i woke up with several thoughts running through my head. This fast has been helpful in showing me a different way of thinking, and of putting together pieces of a puzzle i've been trying to solve. Originally, i wanted to go on this fast to detoxify as i felt sluggish and unmotivated. i have always had trouble focusing, and i'm a major procrastinator and worry-wart. During this fast, i felt oddly "normal." i didn't feel anxious or over-worried as i usually do. my moods were more stabilized. this makes me realize that i need to keep a better watch over my blood sugar dropping. during the fast, i could tell everytime i needed more lemonade because i would become suddenly irritated and angry. once i drank the lemonade i felt better. i believe that i have internalized a lot of these negative feelings that may have a large part to do with my metabolism and blood sugar levels. Maybe because this fast focused my attention so much on elimination of bodily waste, it was easy to see these negative thoughts similarly as "invaders," separate entities that enter into my mind and become stored inside my body as pent-up irritation. i've resolved to practice letting go immediately. Also, maybe just the simplified practice of drinking lemonade helped clear my mind and allowed me to focus on the fasting without thinking about too much else. i became a bit weaker through this fast, so it may have given me only enough energy to be aware of the fast.

another realization is that much of my hang-ups about food come from a deep-rooted fear of "not having enough" - physically, emotionally, financially. i think i've always been like this. it makes me act selfishly at times, and feel like i need to hold onto things for fear that i'll lose them or will never have another opportunity to have them. i think this feeling has impacted me negatively my whole life. i've read that if you want to experience abundance, you need to practice abundance. i had been trying to do that more consciously ever since the new year, but this realization compounds it.

and the last realization leads me to why i have trouble focusing. this doesn't have to do specifically with the fast, but i believe something about the process helped me to figure it out. it's not so much that i don't have enough energy, as i first believed, but that i MISUSE my energy. i divert it through anxiety, worrying, and distraction. the reason that i divert my energy is that i become overwhelmed very easily. i am not a good multi-tasker. i have always been jealous of others who seem to do many things at once so easily. i used to think this was something i should just get better at. but i have to accept that my strengths lie in different areas, and i need to develop those strengths. i am much better at doing one thing at a time. it takes me way too much energy to switch gears constantly. i believe this is the reason i am so detail-oriented. it allows me to focus much more fixedly. if i have too many things i need to do, it's like my brain just shuts down and i can't deal with anything. I decided that i need a way of organizing my thoughts to streamline my tasks so that i don't get overwhelmed. so far i haven't quite found a system of doing that, so i am searching around for one. but it feels good to know that i've found the root of the problem, and i can begin to work on it constructively.

Ever since beginning teaching at the Visual Arts Center of Richmond, i have been sometimes overwhelmed at the prospect of teaching and all the planning it involves. there have been times i've freaked out and felt like i simply couldn't do it. but one thing that helped was to simply sit down and actively try to solve "the problem" - write lists of the materials i'll need, brainstorm on class ideas, and call people if i need help. this very basic way of tackling problems has been so much more helpful than simply beating myself up for not feeling capable right away. i AM capable. I just feel afraid sometimes. 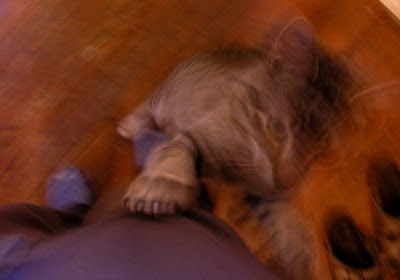 anyway, this has been a rather long post. but i felt it was important for me to get these thoughts down. hope everyone's having a great day. time to go to the grocery store and get some cat food for Dozer. Here's a picture of him jumping on me when he wants to tell me something.
Posted by Aijung Kim at 10:09 AM