Happy Year of the Pig! Watercolor and Papercut Process 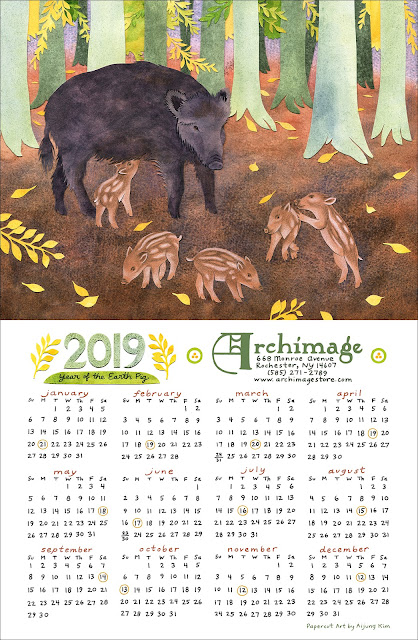 This is the fourth calendar I've designed for my family's gift store, Archimage, in Rochester, NY. Every Christmas holiday, they hand out these calendars when people make a purchase. Most of the calendars have followed a Chinese Zodiac theme, and starting February 5th, 2019 it's the Year of the Earth Pig! People born under the year of the Pig tend to be logical, kind, and appreciate the finer things in life. Pigs are symbols of wealth, so let's hope that extends to many of us in 2019! Though they say your fortune depends on what animal sign you're born under.

Let me walk you through my process for creating the finished piece:

I researched the internet for photos and facts on farm pigs. I even watched videos. Pigs are cool creatures. They have an excellent sense of hearing and smell. They use their snouts to dig up roots and sniff out truffles, a culinary fungus. Groups of sows and their young live together in communal groups called sounders. Sows are great moms! 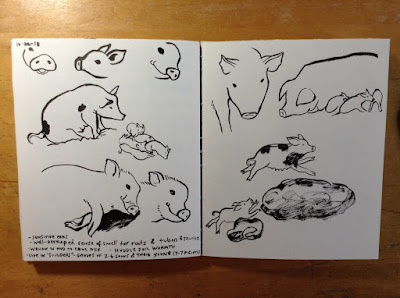 I also kept stumbling upon the cruel fact that pigs are tested on a lot in the medical industry and in military trauma-training. Also, in factory farms, pregnant sows are kept in tiny cages where they don't even have room to move around. I was aware of some of this already, but being reminded again made me feel very sad.

I wanted to create a visual for pigs that depicted a sense of hopefulness and optimism for the new year - I thought about the phrase "when pigs fly," but it was hard to escape the fact that most farmyard pigs are not destined to a life of freedom - though if you want to read about a pig who lived a wonderful life, I highly recommend "The Good Good Pig" by Sy Montgomery. 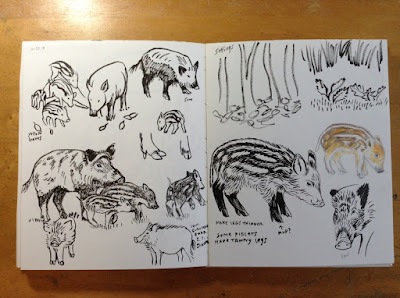 After talking about all this to my dad, he suggested I depict a wild pig instead. I was already leaning toward this idea but felt affirmed by his suggestion. Domestic pigs are the descendants of wild boars. I was delighted by the beautiful coat patterns of boar piglets. Sows in general are amazing mothers! They nurse so many piglets at once, often flopping on the ground to give easy access to their teats. I was especially struck by the maternal and protective nature of these creatures, so my idea for the image formed around a mother sow and her piglets.

I then created thumbnail images of different compositions. 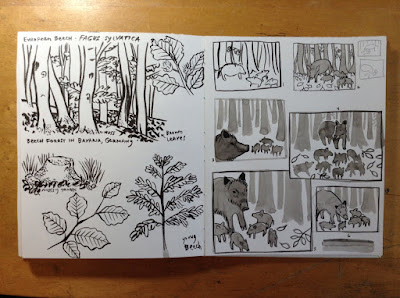 I sketched my final image on tracing paper, but cut out some of the piglets and moved them around to play with the composition. When I was satisfied, I taped the pieces down. I had a million tabs up on my browser of various boars and piglet configurations. I don't like to copy other people's photographs, so I was determined to create my own grouping that was different than what I had seen. Honestly, this was kind of hard to do since I'd never seen these animals in person. 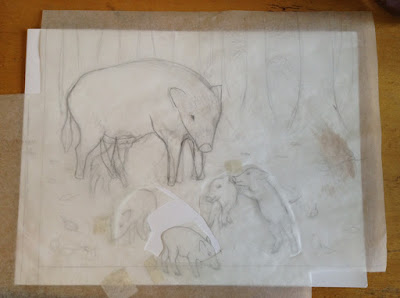 I knew I wanted to work in watercolor, but watercolor can be so unforgiving! I decided to combine watercolor and papercut so I'd have room to move elements around and swap out things that didn't work.

I began with a watercolor background on a 140 lb. watercolor pad. I wanted to recreate a Bavarian forest scene, in particular the beech forests that had such lovely golden leaves in fall. I wanted an earth-colored ground that would nicely contrast the golden leaves and green-tinted trunks. However, I didn't do any color tests or think ahead much further than that, and I found that the ground matched the color of the piglets too closely! I ended up darkening the ground, but had to be careful of not making it too dark or the mother boar would disappear in the background! 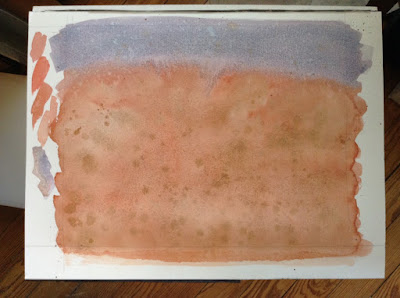 Then, using a medium-thickness drawing paper, I painted the hues of the mother boar, piglets, and golden beech leaves. I painted the tree trunks on a thicker printmaking paper because I wanted more dimension in the trunks. 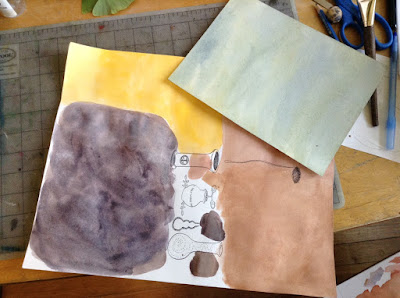 When dry, I flipped the papers over and transferred the drawings by placing the tracing paper drawing on top and going over the lines to transfer the graphite. 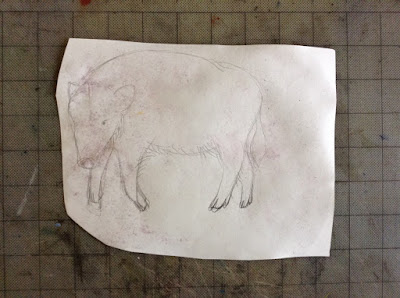 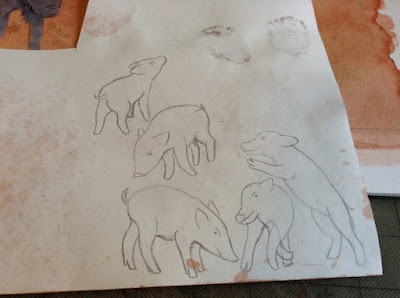 I transferred the piglets the wrong way the first time - I forgot I had to transfer the reverse image onto the back of the paper for it to be the correct direction on the colored side! But it allowed me to test out the coloring of the piglet fur. I tried using gouache, watercolor, and pen at first, but didn't like the
contrast. I settled on colored pencil. 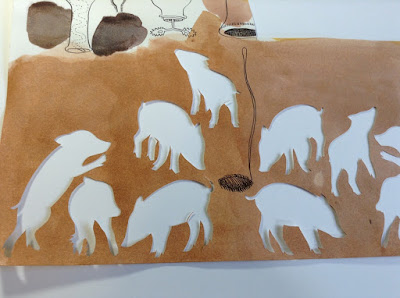 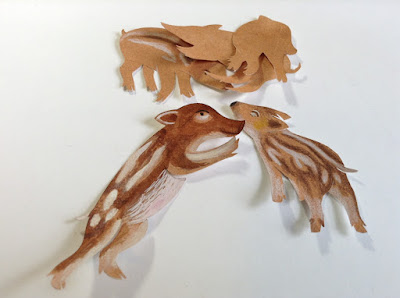 I used a blade to cut out the silhouettes of the animals and a few interior lines, but I didn't want to get too fussy. I wanted preserve the integrity of the shapes as a whole. 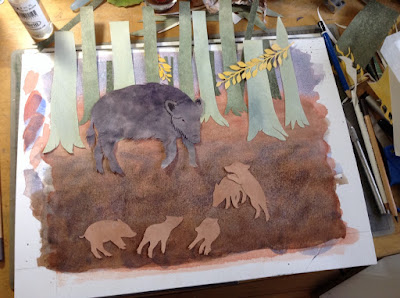 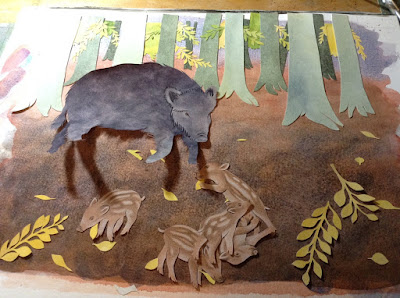 I ended up adjusting the composition slightly, but was able to place my tracing paper composition over the image to check if I was getting too off-track. 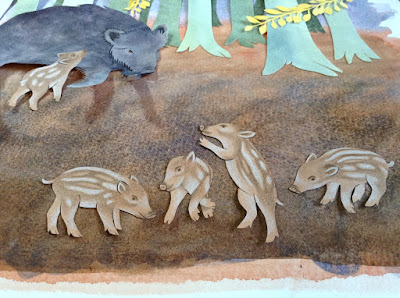 This is the way my desk looks when I'm really working, complete with snot rag and piles of mess. It only stays clean for but so long. 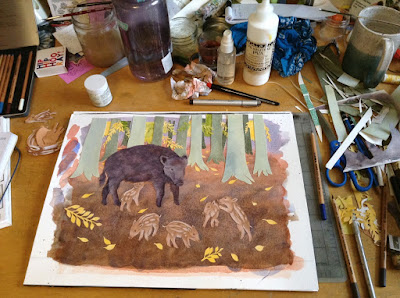 If I had a better camera, next time I would photograph the papercut art instead of scanning it to retain more of the nice shadows and dimensional aspect of this form of art.

This was a lot of fun to make, and I'm excited to keep working in watercolor and papercut! Wishing you all a Happy Chinese New Year! 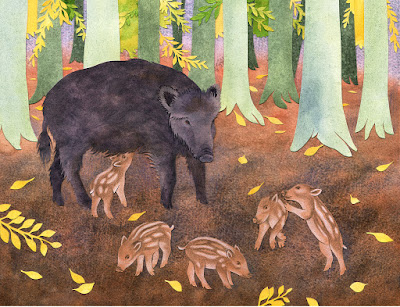