I forgot to add in one more image among the choices for the bookplate designs (see previous post). #20 is the picture of the moth. 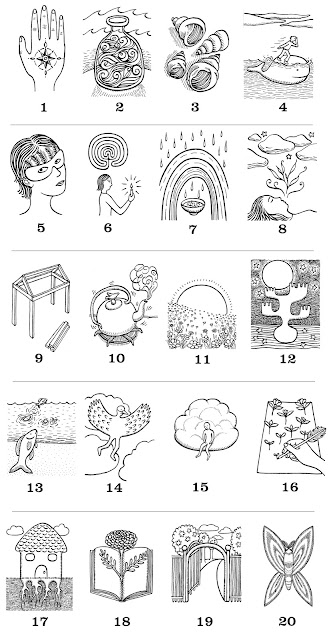 The Golden Moth Illumination Deck was successfully funded by Kickstarter last night at 9:49 pm! As I watched the minutes tick away, I felt a satisfied relief that the campaign was over. Thank you to all the Backers for all that you have done to help create a successful campaign - from pledging to spreading the word, to sending encouragement. It is an amazing experience to know that 127 people have got my back!

While I have enjoyed this campaign and learned a lot from it, it has felt a bit unreal at times since most of my Backers are people I haven't seen in years or never met in person. But come April, it will certainly feel real when I package and ship 127 rewards! And for those of you who live in Richmond, VA I am planning on a special release party so you can pick up your rewards in person if you choose - more details to follow.

The Golden Moth Illumination Deck has been the biggest project I have ever taken on. It has warranted a great deal of work and planning:
I have been working on the bookplate designs. Here is a sample of what they will look like:

I originally wanted the bookplates to be printed in a brown/vintage red color like the examples to the right. But I wondered if my Backers would prefer the blue/gold color scheme I used for the card design. So I'd love input on which color scheme you like best, since I can only print one.

I'd also like your feedback on which symbols you like best to be the images on the bookplates. I plan on printing 6 - 9 designs, depending on the variety of feedback I get. Please let me know which are your favorites. If you right-click on the images and select "Open Link in New Tab" you can use the magnifying glass tool to get a close-up of the images. 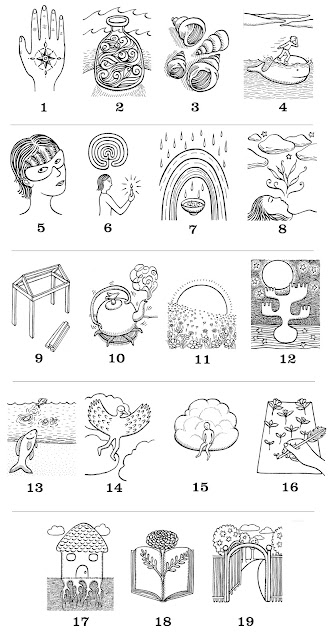 Oh, and I just started a new E-Newsletter service. Please subscribe here. I send out updates once a month, but you can choose to receive updates less frequently. I will send updates about art news, craft shows, and Sprout Head shop sales!

Thank you!
Posted by Aijung Kim at 7:24 AM No comments:

A big THANK YOU! and here is "The Arrow" Card Spread Sheet

I'd like to announce that my Kickstarter project "The Golden Moth Illumination Deck" surpassed its $4,000 fundraising goal yesterday! THANK YOU to all who sent their support my way, be it through monetary pledges or spreading the word to other people. It's a great feeling to know that so many people have gone out of their way to support my project. many new and old friends showed me that they care about me and have faith in my abilities, and that means a lot :) I still have a few days left to fundraise more! So please visit my Kickstarter page to check out the card deck and make a pledge. 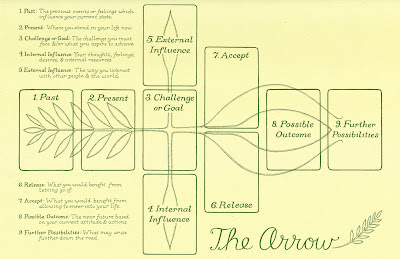 I just finished up drawing the card spread sheet that will come with The Golden Moth Illumination Deck (it will also come with a guidebook). "The Arrow" card spread sheet is an 11" x 17" sheet of paper with the card positions printed on it so you can lay the cards right on top. The spread is called "The Arrow" because, to me, it resembles an arrow. I made up the spread after looking around www.aeclectictarot.com and combining some of the spreads that I read about into one that I really enjoy using. My favorite part is the "release" and "accept" cards because I think they are quite helpful when trying to figure out the best means of action or a different attitude to take on a situation.

For those unfamiliar with tarot readings, the querent (or person seeking advice through the cards) asks a question to gain insight into a situation, and the cards are shuffled and picked out. the reader will lay the cards into the appropriate positions and then "read" what the cards are saying. Just as important as the cards themselves are the positions they are placed. The placement can change the meaning quite a bit. Say, for example, that this card shows up in the "Accept" position: 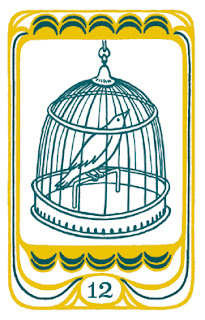 Normally, I would look at this card and think it had something to do with the querent feeling trapped, restrained, and possibly unhappy. But if it appeared in the "Accept" position, I would interpret this card as saying that the querent should accept a period of feeling confined or restrained. Perhaps the querent would usually deal with the situation by running away or breaking obligations. This card would advise that it would be beneficial for the querent to remain in the situation. Upon further thought, the querent might also decide to change his or her attitude towards the situation - instead of seeing the restraint as something bad, they could see it as an opportunity to practice their focus and discipline. Perhaps the period of restraint is trying to teach them something important.

That's all for now. More updates to come in the next couple weeks as I continue to finalize the artwork for the project. whew, it's nice to know that the goal has been reached and it can only get better from here!

thank you everyone for your amazing support!
Posted by Aijung Kim at 8:01 PM 2 comments: 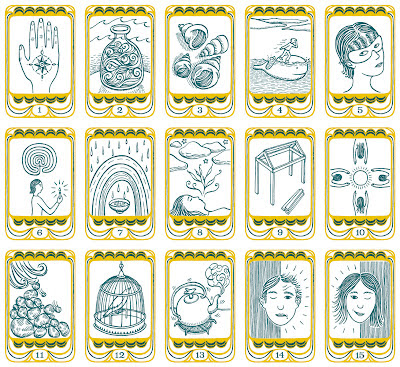 Here are 15 completed symbols for The Golden Moth Illumination Deck. I've drawn more, but this should give you a better idea of what the finished deck will look like.

I can't believe the fundraiser will be over in 6 days!!! I HAVE UNTIL SATURDAY, MARCH 10TH TO RAISE THE REST OF THE FUNDS - $190 to go before I'm completely funded for this project! So if you want to pledge but still haven't yet, by all means GO TO THE KICKSTARTER PAGE NOW!

it has been very exciting to check my inbox and see that someone has made a pledge. i'm bowled over by everyone's generosity to the project, and i truly hope that everyone will be happy with it once it gets into their hands. it has been fun but also a bit stressful to be simultaneously creating the artwork while also trying to promote my fundraiser. but it's a neat way to show people my progress on this project.

I should be posting more artwork in the coming days, so keep an eye out. and what are you waiting for? make your pledge now and get some cool rewards like the card deck, notecards, postcards, bookplates, posters, and original artwork! Thanks!
Posted by Aijung Kim at 3:48 PM No comments: