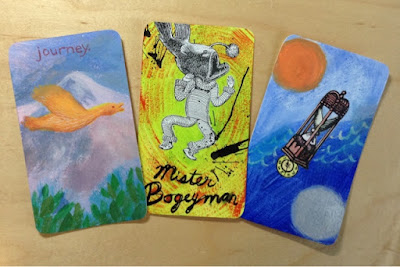 Ever since creating my own oracle deck, The Golden Moth Illumination Deck, I've wanted to lead a workshop to encourage others to make their own. But unlike my deck, which was reproduced by offset and digital printing, I thought the experience of making a one-of-a-kind handmade deck would be approachable for beginners, and a refreshing change for me. The cards above were some samples that I created using acrylic paint, collage, and ink.

In February I taught my first "How to Make Your Own Fortune Cards" workshop at The Visual Arts Center of Richmond. I will be teaching another section of this weekend workshop on July 18 and 19th, so sign up here if you're interested.

The participants in the workshop were wonderful. Everyone came in with such an open mind. I loved the concepts behind their cards as much as I loved the cards themselves. Many of the students were at least somewhat knowledgeable of tarot and oracle cards, but there were a couple of people who weren't. Some students professed they had little art experience, so it was pretty amazing to see what they turned out. Every student had their own unique perspective and each approached their cards thoughtfully. They used watercolor, ink, colored pencil, collage, and photocopy transfer, and they graciously allowed me to share their cards with you. 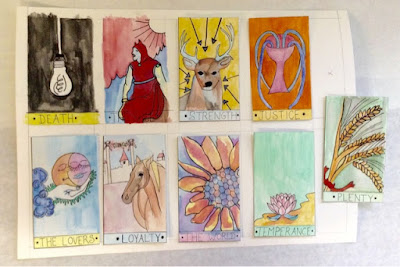 This deck was inspired by the major arcana of the Rider-Waite tarot. She mixed traditional tarot imagery with her own symbolism and and a fresh color palette. 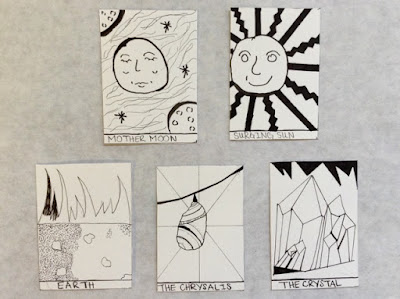 These cards were based on the sun, moon, moths, and butterflies as symbols of introverted and extroverted energy. 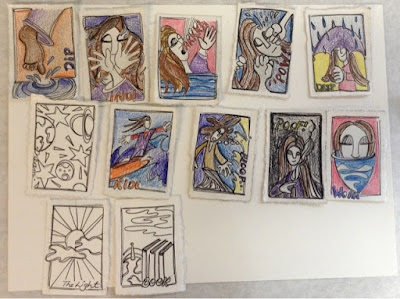 This deck used four suits as in tarot, but each suit was based upon different pyschological states. I love how she used action and sound words in her cards. 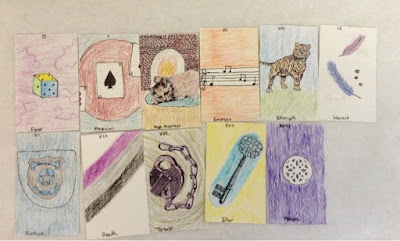 This deck was also based on the major arcana, but each symbol she chose had personal significance in her life. 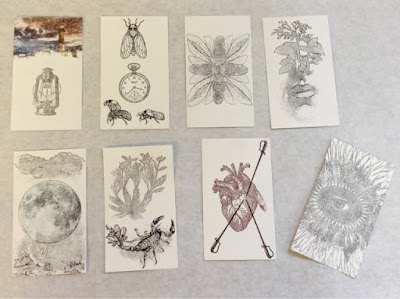 These cards also used personal symbolism, and each card represented one year of his life. 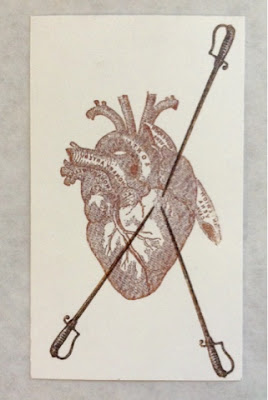 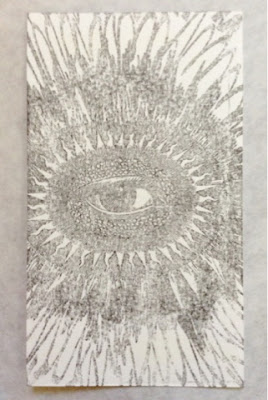 He used a cool technique called xylene transfer. He placed photocopies of images face-down onto his cards, saturated them with a clear blender marker, then rubbed the backs of the copies down hard with a spoon to transfer the images into the cards. This technique works for laser copies in black and white and color, but it's not the best for your health so I'd recommend you do it in a well-ventilated room. 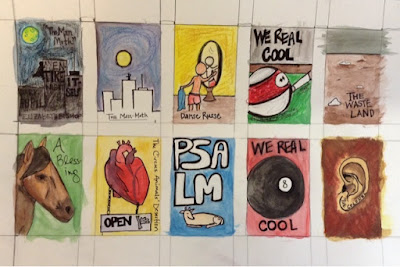 This student is a poet, and she used titles and imagery from various poems to create her deck. Great idea, huh? 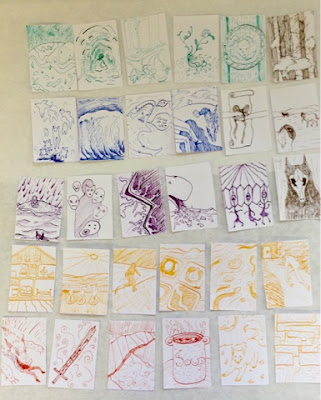 This student is an illustrator who used imagery from her own dreams. 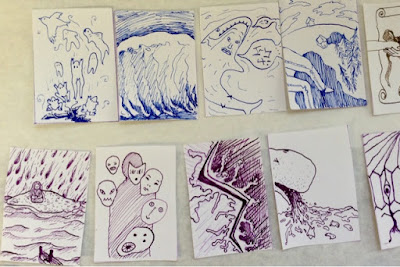 Look closer at some of this surreal imagery. She hopes to create a more finished deck in the future, and I hope she does because I'd love to own a copy myself! You can check out more of Amy Lovvik's art here. 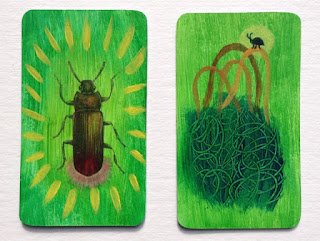 Here are some more sample cards I made during and after the class. The beetle card in the middle uses another form of photocopy transfer called gel transfer. There are a couple techniques to do this, but for this one I applied clear acrylic medium to my painted card, placed the photocopy of the beetle face-down on top of it, and burnished it so it stuck flat. After it dried, I wet the back of the paper with water and rubbed the paper off with my finger. Some of the image rubbed off, but most of it remained. 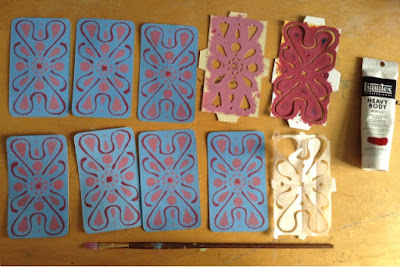 I also created stencils for the backs of my cards out of cut-out cardstock. I placed the stencils on top of the cards and dabbed acrylic paint on them with a paintbrush.

Teaching the workshop made me see how empowering and creative it is for individuals to make their own decks of cards. It was an amazing thing to witness.

I hope you've enjoyed seeing some of the wonderful things that came out of this workshop, and maybe you're inspired to make your own!
Posted by Aijung Kim at 6:51 AM