In early February of 2012, I launched my Kickstarter campaign to produce The Golden Moth Illumination Deck in a limited run of 300 decks. In mid-June of that year (2 months later than I had planned) I sent off the first decks to generous Kickstarter backers who supported me. It has now been over two years since it all began. Little did I know that the Golden Moth would sweep me up a whirlwind of fluttery wings and deposit me back on earth as a changed, and hopefully wiser, person.

I mailed deck #254 out of 300 last week, which means I only have around 40 or so decks left for purchase from the original edition and I'm keeping a few for myself. Last week I went through all of the remaining cards and finished sorting out the printing variations/errors so that the remaining cards would be ready for corner-rounding.

Here are the last remaining cards on my shelf: 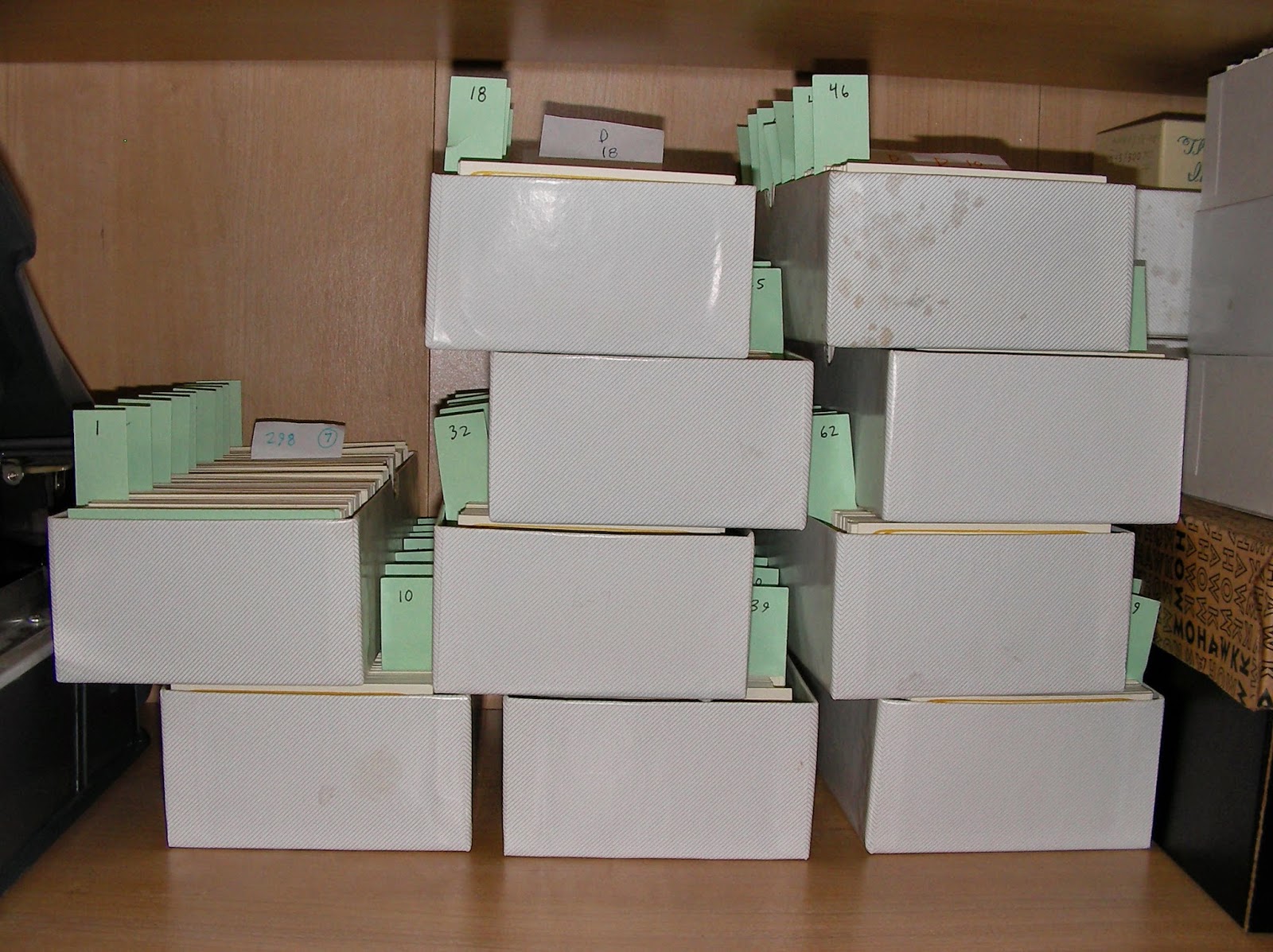 Some of you might remember when they took up a kitchen counter and two tables: 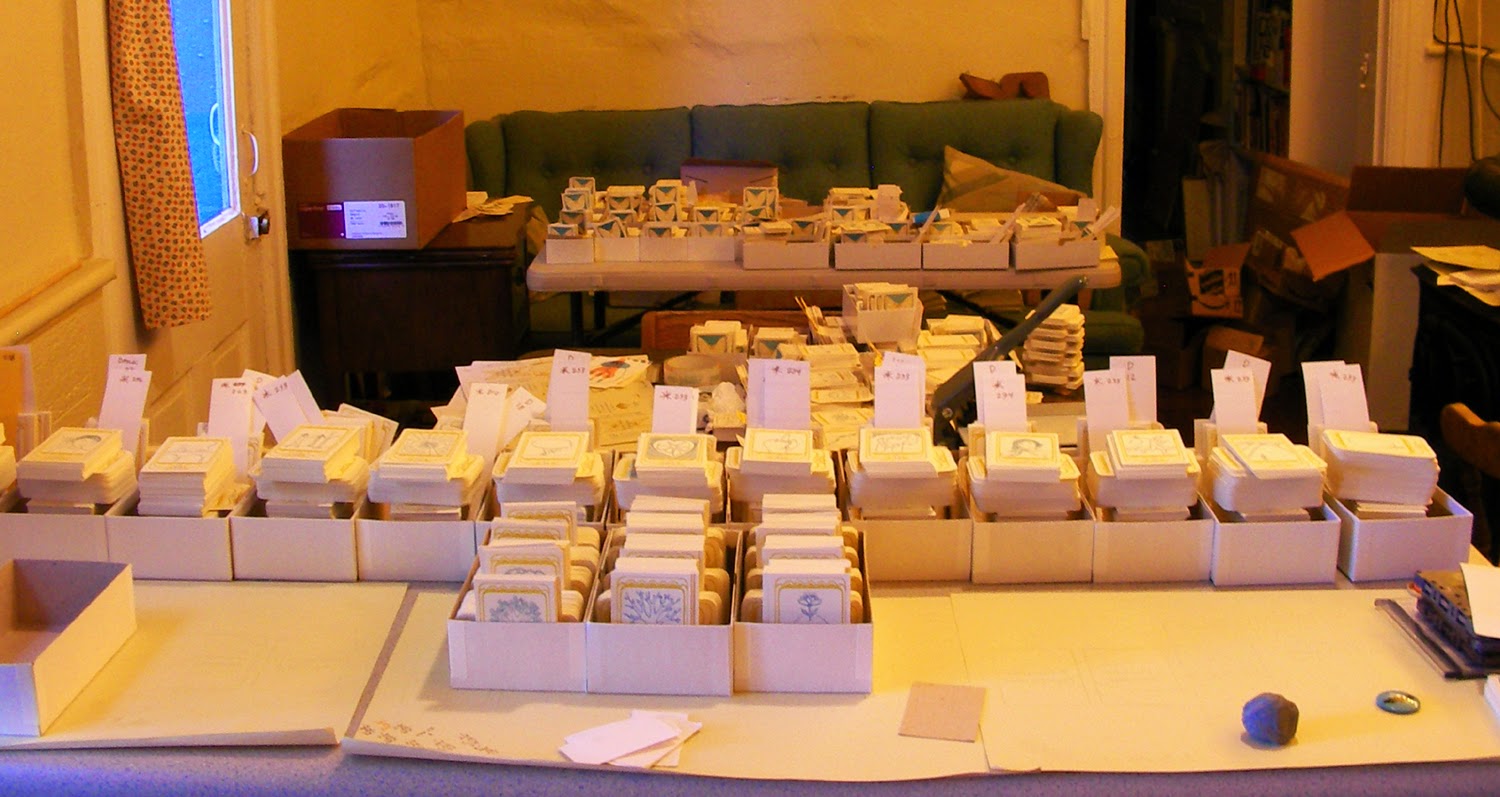 Back in 2012 I had arranged for my printers, Parcell Press, to print and trim the cards for me but I had decided to sort, collate, and corner-round the cards and assemble the boxes by hand in order to cut down on my costs. My boyfriend, parents, and a handful of friends helped me out as well. Before I received the cards, I had envisioned assembling all 300 of the decks within a relatively short span of time, maybe a couple months. After a couple of months of almost losing my mind from the pressure of delivering 127 Kickstarter rewards, I decided from then on the decks would be assembled in periodic small batches. I would spend literally hundreds of hours doing the aforementioned tasks for the next two years. 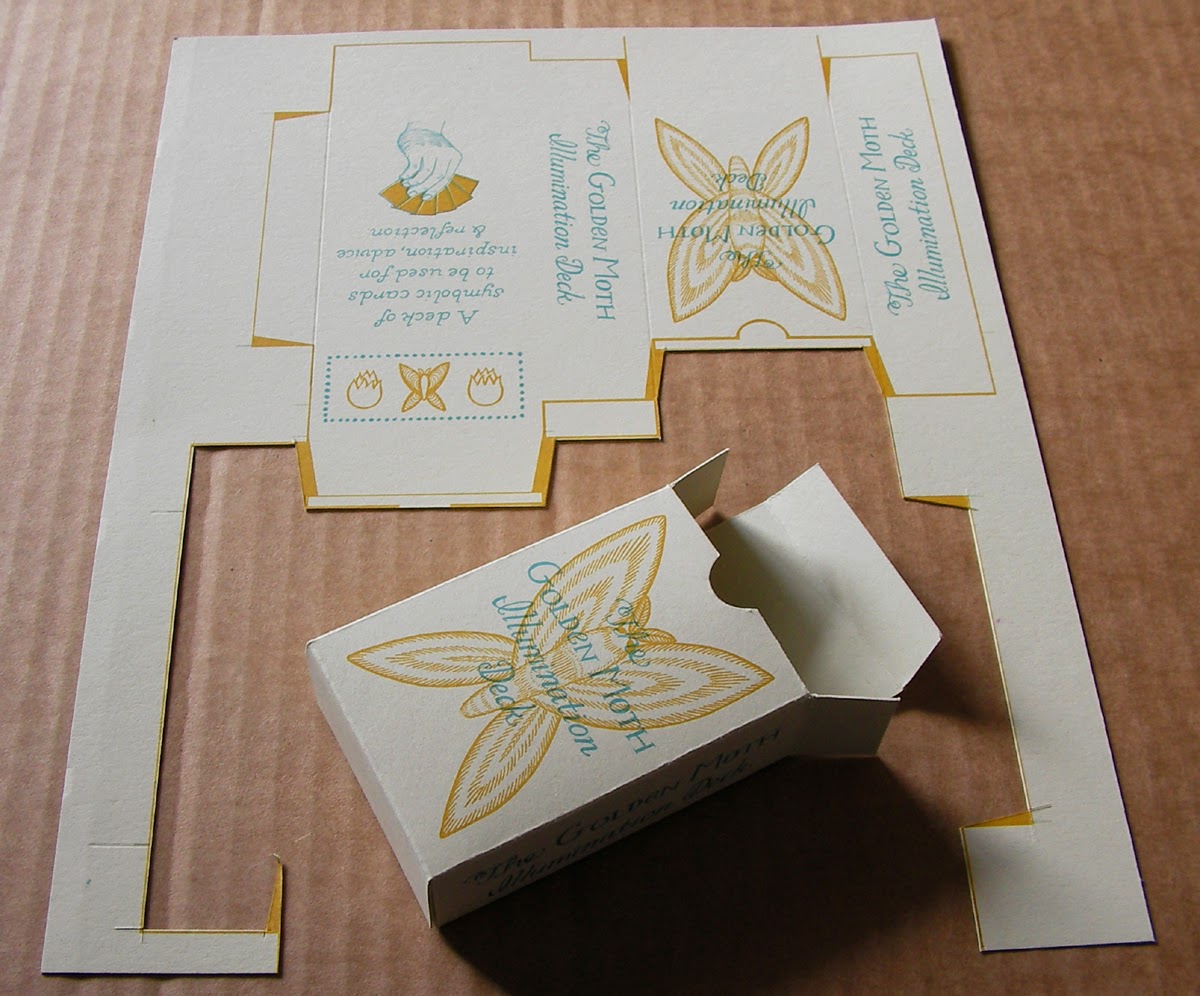 What led me to this situation was severely underestimating the time it would take me to do these tasks by hand. Why, oh why, did I not time myself in making a prototype from start to finish? Take corner-rounding. Each card has 4 corners to corner-round. Each deck consists of 75 cards. That's 300 corners per deck. That's 90,000 corners for 300 decks. Let me repeat that: NINETY-THOUSAND. Hmm, when you break it down like that, that's a lot of corners and a lot of potential shoulder pain. 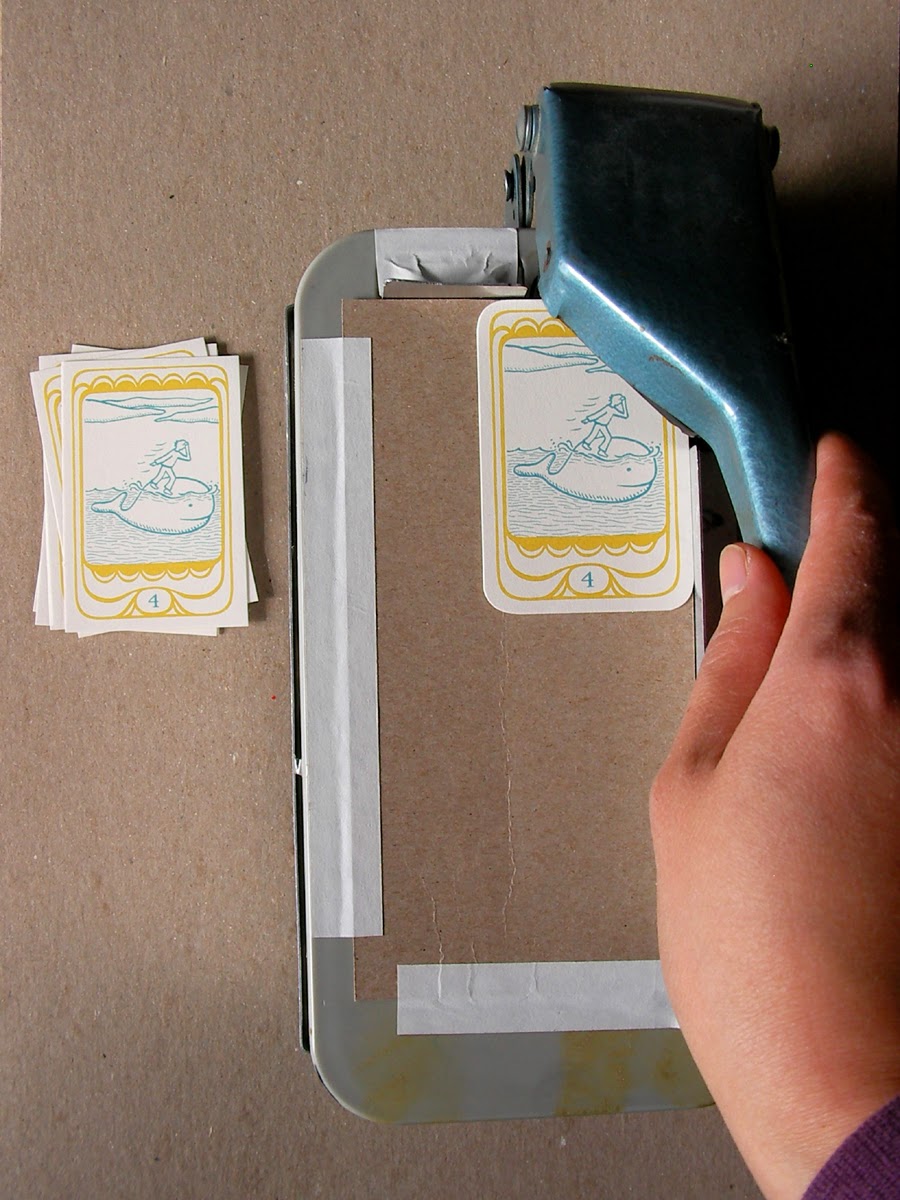 Here are some other fun Golden Moth statistics:

* For my Kickstarter campaign, I was backed by 127 people. Most were from the US, and 31 of those people lived in my current hometown of Richmond, VA. I also had 10 international backers from Canada, Australia, England, Singapore, Italy, New Zealand, and Norway.

* 102 decks were purchased through the campaign.

* For the other Kickstarter rewards, I sent out 194 postcards, 67 notecards, 39 bookplates, 26 screenprints, 111 pieces of small original art, and gave 7 Intuitive Card Readings (like tarot readings but using the Golden Moth cards).

The other day when I went through my Kickstarter campaign report to tally up these numbers, I read through the list of backers again. I re-experienced the amazed, encouraging feeling of having friends, relatives, and strangers donate money because they believed in me and my project. At one point during the midst of Golden Moth assembling madness, I told the people closest to me that if I knew it would be this hard, I might never have done the project at all. I don't handle stress well to begin with, but producing The Golden Moth Illumination Deck has been, to date, the biggest and most overwhelming project of my life. Now I look back and affirm that the statement was true, that I probably wouldn't have done it if I'd known.

And so I'm really glad I didn't know, because the deck has also been one of the most far-reaching and positive projects of my life. I made some new friends and became closer with friends I already had through the project. I've had many people tell me how much they've enjoyed and appreciated the deck, and how it has brought some clarity to their lives. I am very thankful for that. This has also been the most "collaborative" project I've ever done. The cards take on different meanings with each new owner, and their use and purpose goes beyond just me. I love that about the deck.

So I'm forging ahead with the next step. I would like The Golden Moth Illumination Deck to reach an even greater audience. I plan to make a larger commercial run of decks so that I can lower the per-unit cost of producing the decks and get more decks into stores and other venues. I don't want to do any more handwork on the decks in order to free up my time for promotion and creative energy (as opposed to corner-rounding). I also plan to revise and expand the handbook.

To celebrate the 2nd Anniversary of the Golden Moth and to pave the way for this new expansion, I'm now offering the limited edition deck in my shop, Sprout Head, for a $5 discount - from $50 to $45. Added to this, I'm offering a super-special (and super-short) sale in my shop that ends on Wednesday, June 15th. Use the coupon code FLYAWAY upon checkout and receive an ADDITIONAL 10% off your entire shop purchase! If you apply this to the deck, it will cost only $40.50 - that's $9.50 off the original price! Remember, you must apply the coupon code upon checkout or you won't get the additional discount. If you've been waiting to get your hands on this limited edition handmade version of the deck, don't delay or else they'll soon be gone! 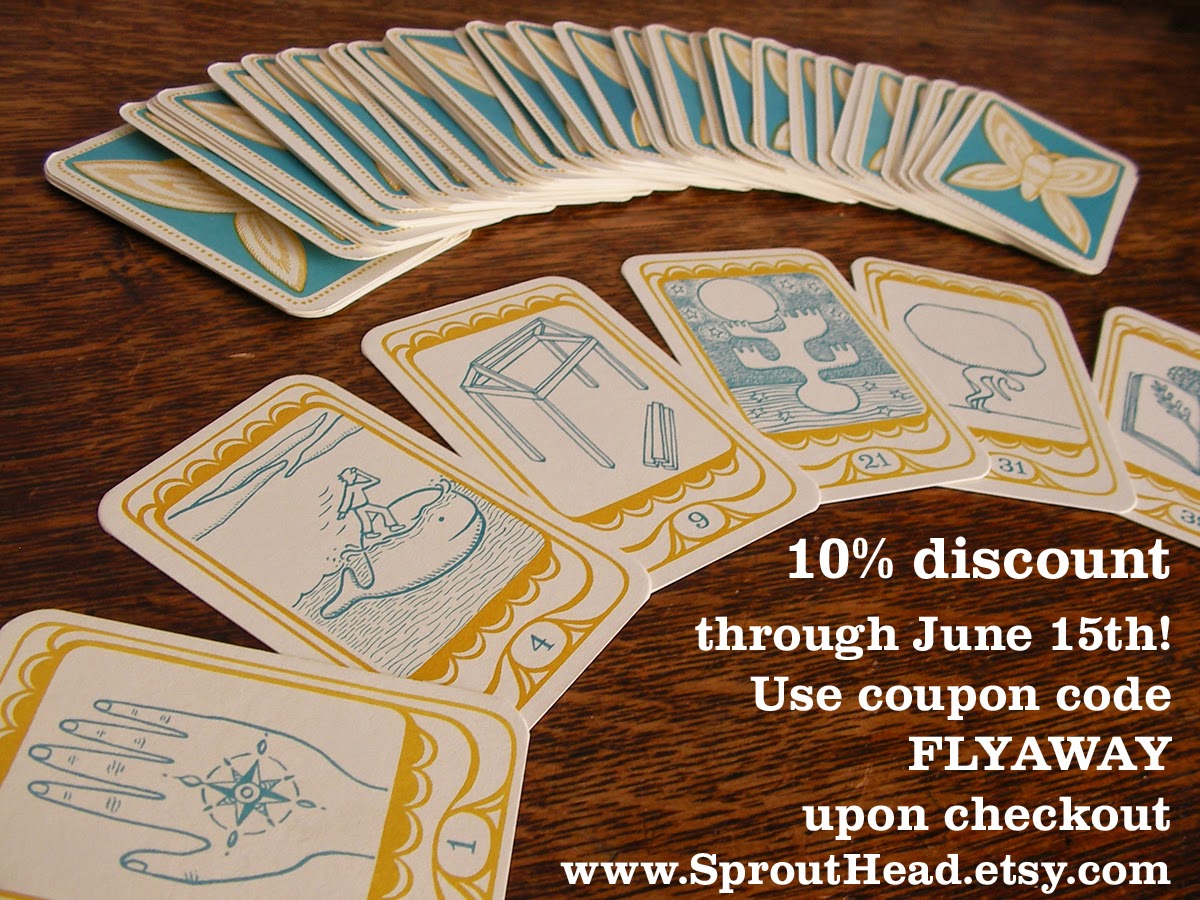 I'm also offering a sweeter discount for those of you who already own a deck. If you complete this short survey, you are eligible to receive a coupon code for 20% off your entire store purchase. This coupon will expire on August 31st. To take the survey, click here. Please respond by the end of June if you want your feedback to be incorporated into the creation of the new deck and handbook. If you do not want to take the survey but would still like to provide feedback, feel free to post comments on this blog or leave a comment/message on my Golden Moth Facebook page: www.facebook.com/goldenmothdeck