What I Did This Summer

This has been one of my busiest summers yet. Here is a recap of how I spent my time from spring through the end of August.

This Spring, I took an Intro to Watercolor class at The Visual Arts Center of Richmond, taught by the lovely and thorough Susan Quinnild. I have done watercolor all my life, but never received formal training for it. Getting all the basics was a great experience for me. After the class, I wanted to test my skills in glazing and layering color and contribute a piece of art to the People's Portrait Project at the VisArts - a project where anyone could donate a 5 x 7" portrait. My boyfriend buys and sells records for a living, and I was inspired by an Art Blakey record that he brought home one day: 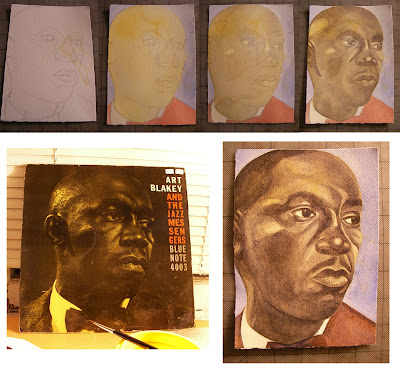 Thinking this would be a "test," I used paper that I had previously painted on which you can see a bit in the right side of the paper during the early stages. I really enjoyed the process of creating this painting. However, there are a few things I learned from it. One: I need to map out my composition better before painting! I left out his ear and didn't fix it because I didn't want to have to re-do my drawing. Also, I rather liked the looser, low-key (not as much contrast) version right before the final version. Next time, I'd like to build my painting so it incorporates more of the looseness and color blossoming. But overall I'm happy with it. 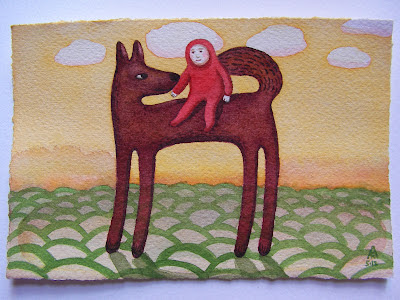 I created this small watercolor for a friend's baby shower. I think of the dog as a guardian, protecting the little one on his long and adventurous travels.

From May to July, I was busy assembling Golden Moth Illumination Decks for my Kickstarter backers. This took an incredibly long time, and stretched into mid-June when I started teaching classes to children during VisArts' ArtVenture summer art camp. I was hoping to have decks for backers finished before then, so it was a busy time for me with teaching and assembling decks during every spare moment. Luckily, I received a lot of help from friends and my boyfriend, and my dad single-handedly corner-rounded 50 sets of decks when I visited my family in Rochester! Here is the mess that was my kitchen: 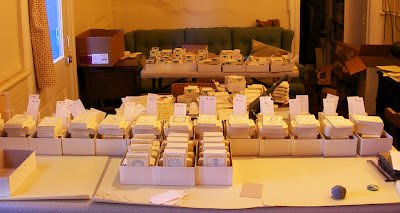 It was physically and psychologically draining to have hundreds of unfinished cards in view for months on end. I have since put them away in a big box and only take them out when I need to assemble more. There are still over 100 decks to assemble.

On June 16th, I had a Golden Moth Release Party at the Blue Elephant, a vintage and home decor boutique. Friends visited, people bought decks and artwork, and I gave several Intuitive Card Readings (similar to tarot readings). Patsy, owner of Blue Elephant, and her daughter Jessica, manager, provided refreshments and a colorful array of tasty donuts. They are awesome people, and so is their store which has relocated to 119 Robinson St between Grove and Floyd Avenues in Richmond, VA. The new space is even bigger and better than the last. It is such a fun experience to sift through all the treasures in their shop. There will be a similar event at their shop coming up on Saturday, September 15th from 1-4 pm. I will be giving readings and selling decks and art. 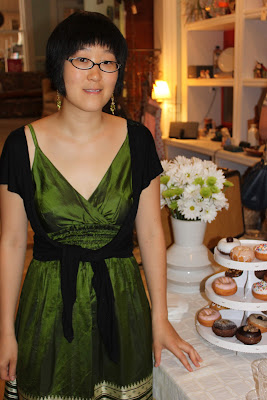 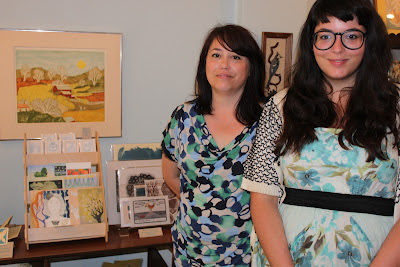 As I mentioned before, I began teaching art workshops to children in June through the end of August. Here are some images from my Paper Toys class for youth ages 6-8. 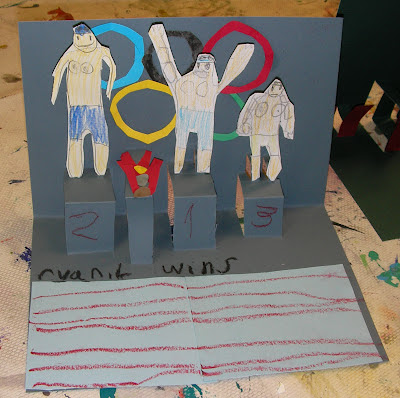 This student spent all class working on his elaborate pop-up card: "Ryan Lochte crushing Michael Phelps." I myself did not follow the Olympics, so it was fun hearing the kids talk about it. 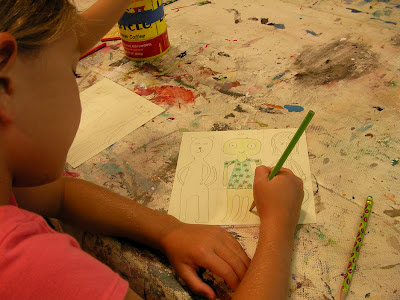 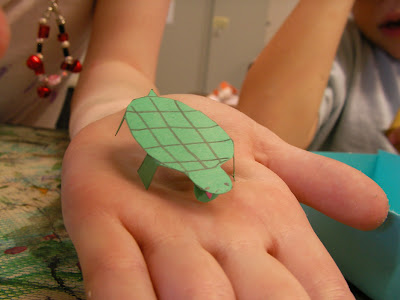 A student came up with this cute paper turtle. Note that the mouth opens to reveal a tiny pink tongue.

I also taught a Paper Bead Jewelry Workshop at the VMFA Studio School. 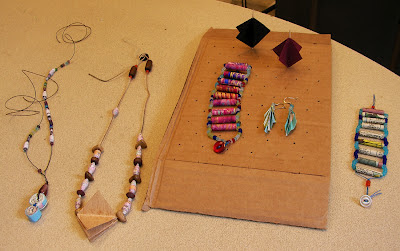 Some cool jewelry made by students in the class. The paper beads were made using recycled magazines, comics, and maps.

Most of you probably don't know that my parents have their own Paper Bead Jewelry business. They sell at craft shows and in shops around the country. As the story goes, my mother was inspired by me - when I was a child she saw me creating paper beads for fun. She and my dad took the craft much further and have a multi-step process of selecting papers, painting them, rolling beads quickly using a special drill that my dad created, applying several layers of varnish, and creating jewelry designs. I am proud that I can spread knowledge of this craft through my classes. Most of my students find the process of rolling beads to be soothing and even addictive! Here is a picture of a student rolling beads during a spring workshop at The Visual Arts Center of Richmond.

In July, I visited my hometown of Rochester, NY. One of the best things about going home is how accommodating my family is. They understood that I was utterly spent from The Golden Moth Project, and they helped me assemble decks and encouraged me to do some heavy relaxing.

It was perfect timing to be able to see art exhibitions featuring my sister Olivia Kim and her boyfriend Dario Tazzioli. Olivia had some sculptures and painting in a group show at Nazareth College. 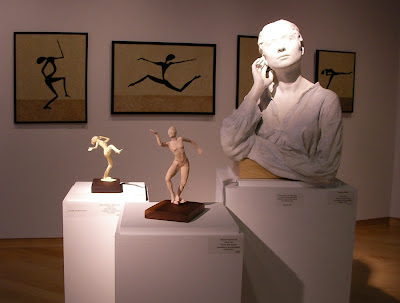 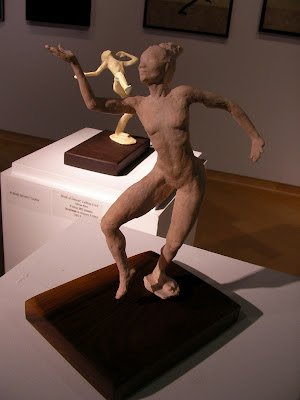 Here is an example of the new direction in her work - a more gestural approach to figural sculptural. Olivia is currently investigating the intricacies of the human body and how it moves. I have trouble enough drawing a moving figure, let alone trying to sculpt it! But Olivia has never taken a challenge lightly.

Dario had a solo show, The Inner World of Dario Tazzioli, at Ock Hee's Gallery in Honeoye Falls, NY. He is a stone carver, in heart and soul. I learned so much by reading descriptions of his process and inspiration for each piece. At the age of 16, he apprenticed with a stone carver who told him that a pyramid was the most challenging form to carve. So of course he went ahead and secretly carved a pyramid. 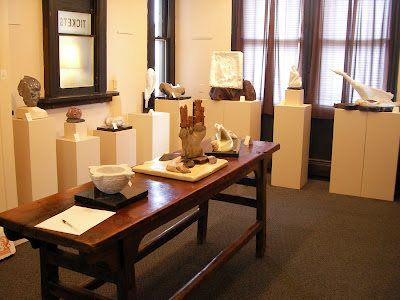 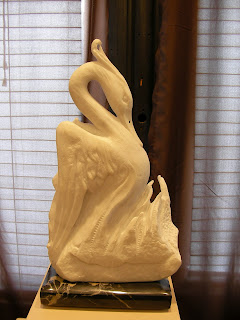 Dario draws inspiration and design from the stone itself - allowing the striking forms, color, and individuality of each piece to reveal itself in the artwork. 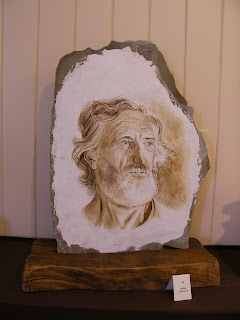 He also created fresco portraits of people from the small village where he lives in Frassinoro, Italy. The process of fresco painting is much different than traditional painting. Pigments are mixed into wet plaster, creating an image that is embedded permanently.


And here's Greg outside of Ock Hee's Gallery, communing with a stone buddha.

On August 2nd, I had the unique opportunity of giving Intuitive Card Readings at the Artist's Reception of two woman who I greatly admire, Robin Kranitzky and Kim Overstreet, at Quirk Gallery. Their elaborately-detailed assemblage jewelry was based on the concept of Rorschach Tests. You can read a great article about Quirk Gallery and their show here. 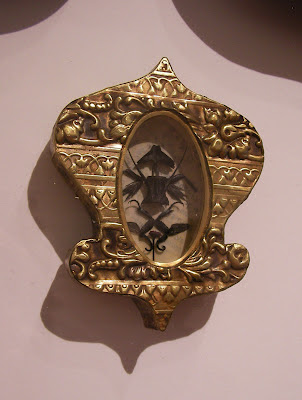 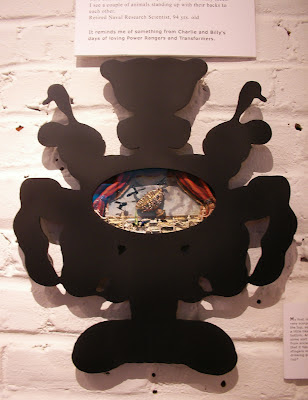 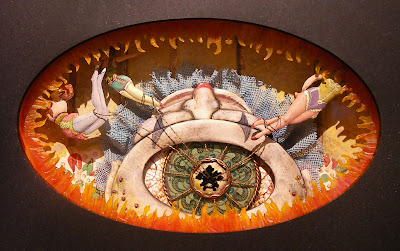 As you can see, their work is just amazing.

And finally, on August 11th I took a Greyhound bus to Gatlinburg, Tennessee to attend a one-week workshop in Embroidery at Arrowmont School of Art and Craft. I have lots of photos for this one, so I'm going to end this entry now and start a new one about my amazing experience there. 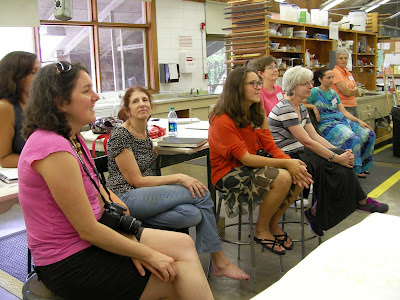